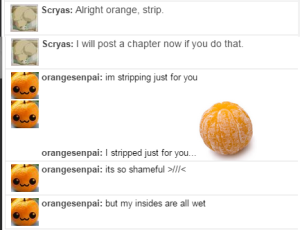 I did some tweaking to the glossary. Titles and Classes are now in the same page as ‘The Cast’ for convenience sake. I removed ‘Monsters’ and ‘Equipment’ because they’re not really important. I will be editing the ‘Skills’ page for a bit before putting it back up again.

The orange light from the setting sun filled the sky, and the classes in the academy finally ended.

Students left the academy in flocks, returning to their own dormitories or homes.

“Even though I still do not understand how you managed to grasp the Light elemental particles so quickly, however, I have matters to attend to tonight. Let’s continue tomorrow.”

And it was also the time Yybril finally let me off.

It was really painful. I had to endure this girl’s mental torture in the battle arena for the entire afternoon. However, she did teach me Light Magic, so it wouldn’t be good for me to just evade her.

“Even if we continue tomorrow, there’s no point right? I don’t even know how I did it myself. Even if you ask me again and again, there wouldn’t be any use.”

“In any case, I have the free time. Training Light Magic does not happen overnight, after all.”

“Alright, however, will you still be teaching me more Light Magic skills in the future?”

“… Well, we can talk about that later. Alright, it’s getting late. I will be taking my leave.”

After that, she quickly left. After making a turn, she disappeared into the back of the buildings.

Although I’m not sure where she’s headed, but since it’s Yybril, there’s a high chance it’s related to the Church.

Though, it’s pretty good that I managed to acquire a magic skill that allows me to recover HP. I need to think of ways to level up the skill a few more times, so that it will be of more effective use in battles.

However, it’s best to hurry back to my place and have a good sleep. Originally, I was already very tired because of the live exercise week. However, even after returning to the academy, I just had to land myself into weird situations.

But, before going back, I should first get something to eat. Back then in the forest, I’m already tired of eating those high-class desserts. I really wonder just how many of those stuffs Shir kept in his ring.

However, Princess Anne’s side wasn’t that better off either. They actually brought various snacks and raw meat. Because of that, I’m tired of eating barbecued food as well.

Right now, if someone offers me barbecued meat or desserts, I feel that I might end up strangling that person to death.

When I entered the commerce district, I could see that the streets were busy and lively.

Currently, it is the perfect time for dinner. And since the academy’s classes already ended, there are many students walking on the streets.

There are even students working in some stores. After all, in this academy, there’s still a larger number of students with commoner backgrounds as compared to nobles.

What should I eat today? I don’t want to touch barbecued meat at all… Even though ramen wouldn’t be a bad choice, but it’s been a long time since I last ate the gyoza in that stall.

Un, let’s eat some gyoza then.

“Yo, Fir huh? Why did you decide to come over today?”

The boss here is a middle-aged uncle, named Howells. I heard he was once a Knight and worked as a mercenary. However, due to serious injuries, he left the frontlines.

However, when he was a mercenary, he visited the Eastern Continent, a place that could only be reached after a 3-month long trip by sea. There, he learnt several delicious recipes.

And gyoza was one of his specialties.

When I was creating my tachi, I heard of the information regarding the Eastern Continent. It seems the system and culture of the continent there is similar to the Asian regions in my old world.

However, that kind of place is evidently a dangerous zone. It’s probably best for me to gain a few more levels before venturing there.

“Oh, so you participated in the live exercise huh. No wonder I did not see you lately. But, you guys came back at the same time as the arrival of the visitors from the other schools. It seems the academy is going to be rather lively.”

“Isn’t that a good thing? Wouldn’t you get more business because of that?”

“Haha, I hope so. Speaking of which, there are a few young customers who are wearing light plated armors. They are probably from another school.”

“Oh right… Do you know of a Knight with red long hair?”

“A Knight with red long hair?”

If I recall, Yybril’s hair isn’t red. Dual’s isn’t as well. I don’t even need to mention Aliyah.

Others… There doesn’t seem to be anyone else. Although I do vaguely remember someone with red hair, however, I can’t form a complete image.

Could it be that person?

“About the Knight with red long hair you’re speaking of, is she a young girl with a height of about 1.65m, and has a blue Knight Sword sheathed on her waist? Also… Does she wear a mouth mask?”

A familiar voice resounded from my back. When I turned to look, the person standing behind me was…

The young Knight girl whom I had encountered at Mitchell Kingdom, and was later labelled as my fiancee!

I had not seen her for two months, and although she still wore a mouth mask, however, from her expression, I could tell that she had changed.

In the past, she was a rather lively young girl. Now, I could only see fatigue and sorrow in her eyes.

Irlin fiercely hugged me, and tears unceasingly flowed out from her eyes.

I was startled by this sudden action. Although I did not know of what to say, however, in such situations, keeping quiet was the best choice.

“Grandfather who loved me very much is currently missing, and my father is the only person left in the house. The strength of our house immediately suffered a large drop, and the rest of the houses took this opportunity to suppress our influence. I… I’m only left with my identity as a Knight, however, I do not have the power to wield my sword in battles at all…”

I might not be able to fully understand what she went through, however, I’m able to understand her feelings.

What did this two months mean to her?

Judging from how she immediately jumped from LV 3 to LV 7, I could feel that she went through pain that she had never experienced before.

Though, I still do not wish to directly confront an entire country.

However, when there’s currently a girl crying in front of you, if you still do not have the courage to admit your identity, would you still be considered human?

I slowly embraced her.

Before I could even say something, she suddenly raised her head and kissed me in the lips.

Before I could react, she already pulled her lips back, and quickly put her mask back on.

“In the future, do not leave me ever again… Alright?”

My mind was blank, completely blank, as I answered her automatically.

Just… Just now, she kissed me?

And it was in the lips?

My… My first kiss… was taken?

The scent that was left on my lips told me it was not an illusion. Irlin did indeed kiss me just now.

“That was my first kiss. So… Please cherish it.”

However… Why are the surrounding people looking at us so weirdly?

Forget about Uncle Howells whose eyes were opened wide because of shock, the student sitting at that table over there ate half of his gyoza, and the other half was sliding off his lips.

And this two young girls who are wearing the same plate armor as Irlin… Alright, can you two not have those twisted expressions?

“And she kissed someone…”

I’m the most shocked one here, alright? I really want to know what’s going on.

“Umm… In any case, why don’t we first… Have some dinner?”

I suggested as such.